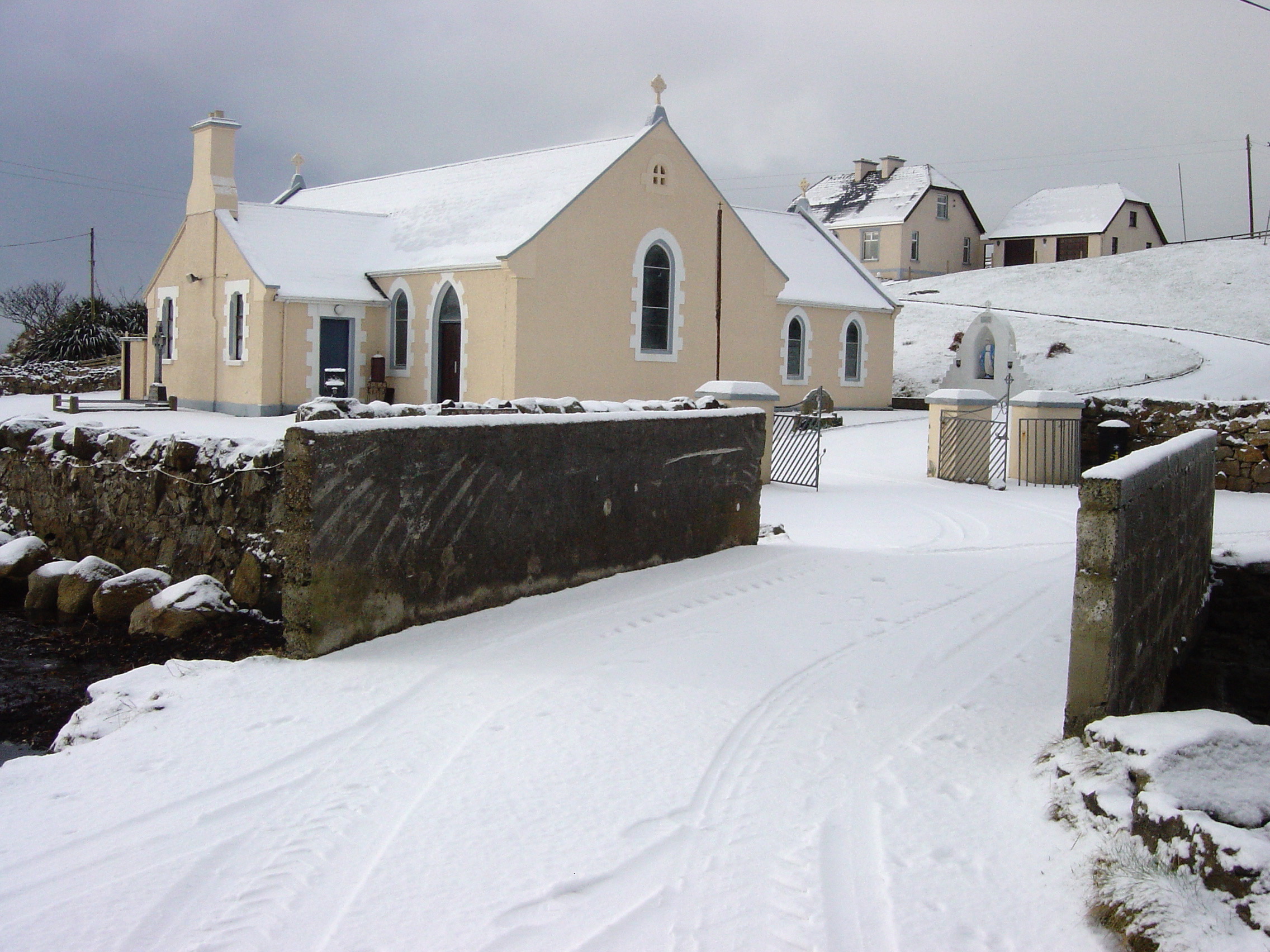 Teach Pobal Naomh Croine is built at a point where three townlands meet – lllion, Gortgar and Ballintra — and the stream known to us as Abhainn Bhaile an tSratha runs into the sea just outside the wall which surrounds the church.

The first church was built here in 1825. Before that there was a little thatched building which was used as a church but it is not known when that was built. The church built in 1825 had a floor of only blue clay and dóirlín (little stones) and for fifty years the building contained no seating area. Eventually, ten seats were put in place — five seats at each side of the altar. Those who used the seats were charged one penny for which they were given a ticket and on leaving the church that ticket was collected from them again. Those who did not have the penny just knelt on the floor. The building had two doors, one for men and one for women. Men were not allowed to use the womenis door nor were the women allowed to use the men’s door. Also men stayed to the left of the altar while the women went to the right of the altar. Indeed thus it remained for many years.

An extension was built in 1917. This extension consisted of the sacristy which faces the sea and the longer aisle towards the back of the church. Stained glass windows were also installed. Rev. John McIntyre was curate on the island at that time. He was a big and strong man who often did manual work to help in the building of the extension. He was Parish Priest in Burtonport at the time of his death in 1952. He is buried here in Arranmore and his grave is directly underneath the sacristy window.In 1837 Mass on the island was celebrated only once in every three weeks as the island did not have a resident priest. The first priest, Rev. Seamus Hargan, came in 1847 during the Famine and, according to tradition, he carried the corpses of the Famine victims to the graveyard and buried them himself. Sadly, he himself died of a fever and is buried at Carraig a’ Chaisil. His last request was that he be buried in a sack as he did not want the community to have to bear the cost of his coffin. Most people were buried like that at the time.

The first graveyard was Carraig a‘ Chaisil. Until then there was no burial ground on the island because the landlords at the time’refused land for a graveyard so the dead had to be brought across to Templecrone for burial.

The last boat carrying remains to Templecrone went on the rocks at Leac na bhFear and all those who travelled with the remains were drowned. The coffin later came ashore at Bealach a’ tSnámh and was temporarily buried in the dunes there until weather conditions improved and it was safe to make the crossing to Templecrone but, sadly, that coffin was never lifted. After that burial took place on the Caiseal which indeed was no more than a bare rock and people had to carry sand and soil onto the rock to cover the coffins. The next graveyard overlooking the sea was opened in 1893.